Most fashionable April Fools pranks of 2014 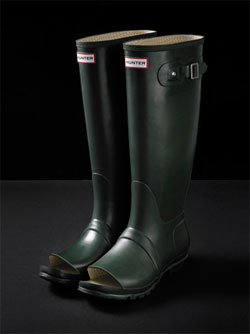 Everyone loves a good April Fools prank, and fashion labels are no different. This year several labels “launched” new products designed to get a good laugh out of consumers. Here are some of the most popular:

– Hunter Boots launched an open-toed rain boot. Yes, you read that right. In the fictional press release, the company lauded the “latest in product innovation” as a replica of the original rain boot first introduced in 1955 but with a new focus on breathability. “This revolutionary design enables air flow to circulate from the opening at the toe, traveling along the foot bed to then exit at the top of the boot (and vice versa). The wearer is afforded a truly ventilated experience. This new technology is expected to represent an industry changing moment for rubber footwear.”

– UK department store John Lewis went the clever-meets-creepy route with the announcement of a hi-tech scanner that could measure shoppers in seconds. The Scanning Computer and Mirror (SCAM) system was announced as a trial system in the retailer’s Isles of Scilly store before being rolled out around the country. According to the Daily Mail, the system would use technology similar to that in airports, allowing fit “advisers” to get an eyeful of customers. No worries though: “special intimacy training” would be provided to sales associates, “so as not to infringe the customer’s dignity”.

– American Eagle Outfitters launched a canine spinoff. “We pulled your tail” the brand later announced on their blog. AEO initially conceived American Beagle Outfitters a week ago as a joke, with the goal of raising money for the American Society for the Prevention of Cruelty to Animals (ASPCA), but the new line got such an overwhelmingly positive response that the retailer now has plans to launch the line for real. Looks for it debuting near the holidays later this year.

– Lululemon took advantage of the holiday to promote itself and poke fun at its own PR disaster. Remember when the company yanked yoga pants off the shelves in 2013, saying that the fabric was too see-through? This year, the company promoted its new “Spray-On Yoga Pants”: a $1,200 can “designed for lightweight flexibility and versatility, [to] take us to and through our practice without the fuss.” Lululemon needs the publicity: their sales have been slipping of late.

– True & Co. introduced “Kitten Sizing” for their lingerie boxes, later posting a page on the website saying, “Just kittens! No actual kittens are involved with our fitting process, but we still have so much fun helping women just like you find their perfect size.” They weren’t the only company to get “catty” with the April Fools day theme: polish subscription box company Julep offered catnip-scented nail polish.

– Fashion-forward polish company Zoya offered customers new subscription boxes for different personality types; for example, the “My Boyfriend Box” promised to be delivered by “a dreamy bachelor”, while the “Tone It Up” box promised to boost energy and burn fat.

AVENUE Shopping Pass – 30% Off, This Weekend Only