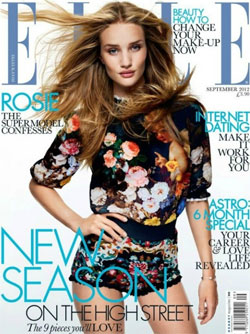 Ah, the September issues. They’re the annual and much coveted fashion bonanzas of the publishing world, with the hottest fashion magazines dropping September issues that measure nearly 600 pages in length and can weigh up to five pounds. And in this year of British fashion love, with attention focused on the fashion of the royals and the Olympics, it seems only fitting that a bevy of British beauties would grace the covers of several of these illustrious September issues.

Daisy Lowe gets mod in geometric purple prints for the cover of InStyle UK.

Meanwhile, It Girls Lara Stone and Kate Moss were photographed for alternate covers of Vogue Paris. Moss shows off the razor-sharp cheekbones and collarbones that made her famous, but dresses it up considerably in a sheer dress and bold red lipstick.

Keira Knightley has one of the most dramatic covers; the actress sports a goth dress and wine lips on the cover of Harper’s Bazaar UK.

Once again, Kate Middleton has topped Vanity Fair’s International Best Dressed list, and she graces the cover of their September issue as well, sporting her trademark glossy blowout and a megawatt smile. Everyone’s favorite Duchess might not pose for magazines, but that doesn’t mean she doesn’t land in their pages often enough; and befitting her status on the list, she always looks picture-perfect.

Designer, fashionista, and former Spice Girl Victoria Beckham covers the American edition of Glamour (and guest edits!). She actually has three covers, one featuring her in a tub full of bubbles, one in a lacy sweater, and one in an embellished Balmain minidress and teal heels.

Not to be outdone, hubby David Beckham grimaces on the cover of Esquire UK. Okay, so he doesn’t exactly count as fashion inspiration, but that doesn’t mean you can’t skim through the issue just to drool over the photographs!

Why Jen Got Dumped!

Getting Better with Each Shot