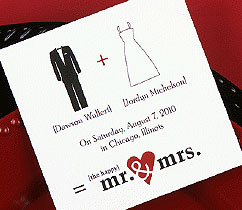 Ever wonder what constitutes a valid excuse for turning down a wedding invite? What about an invitation to be part of the wedding party? Here are eight times when it’s perfectly acceptable to beg off; whether you offer a truthful excuse (or not!) is up to you.

1. When accepting will cost a small fortune. Say it’s a destination wedding, and the total for airfare and accomodations will equal multiple months’ rent. Or you’re asked to be in the party, but the bride wants you to blow a month’s paycheck on your bridesmaid dress. It’s perfectly acceptable to say “thanks, but no thanks” to the invite.

2. When it’s the second (or third, or fourth) marriage for one of the betrothed…and you’ve attended one or more of their previous weddings!

3. When your spouse is specifically excluded. Yes, the couple has the right to control their guest list, but if you’re being singled out to ride solo in a sea of plus-ones for some reason short of a restraining order, you have the right to decline.

4. When you’re not close with either of the betrothed. Feel a little weird getting an invite to your cousin’s wedding you know, the one you haven’t seen in twenty years? A congratulatory card will suffice.

5. When the couple has already eloped, but now wants to throw a big shindig. Couples have varying reasons for throwing a second wedding, but if they’ve already legally married and now want to put on a lavish affair with all the trimmings (especially months later), it’s entirely up to you whether to join in the celebration or simply send a card.

7. When you’re on the “B” invite/wedding party list. Oh, so one of the original choices can’t make it, so now there’s room for you? Pass. This is, at best, mildly thoughtless, and at worst it’s downright insulting.

8. When your ex is involved. Simply put, you’re under no obligation to attend the nuptials of an ex, nor stand in the party, amicable break-up or no. ‘Nuff said.

“My innocence got the better of me”.. Vivek Oberoi

Seven things that shouldn’t be said via text message