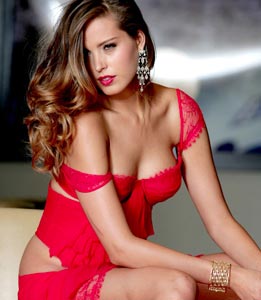 British beauty Kate Beckinsale has been showing off a bevy of fantastic fashions during her global press jaunt for ‘Total Recall’, her newest action film which is finally coming to her native UK.

Beckinsale wowed in a strapless, floor length crimson Donna Karan number for the premiere in Dublin, then changed into a navy Andrew Gn sheath with a leather criss cross halter neck for the after party. She was also spotted in Ireland in a melon tank from H&M, paired with a blue Diane Von Furstenberg skirt.

In Berlin, she wore a navy Zac Posen long-sleeved sheath with bright blue Christian Louboutin platform pumps, then changed into an embroidered long sleeved cream Naeem Khan number for the premiere. In Los Angeles, she opted for a nude Christian Dior sleeveless sheath and red pumps.

But it’s been Beckinsale’s looks as she hits London to promote ‘Total Recall’ that are getting the most fashion buzz. At the London premiere, Beckinsale dressed to thrill in a black Donna Karan dress with a sequined panel, a large bow, and a thigh high slit. She paired it with towered black satin Ferragamo heels, dark nails, refined waves, and glowy makeup.

And Beckinsale isn’t slouching off the red carpet as she jaunts about London. She was spotted out and about in a neon green mini and white pumps with statement earrings, as well as a high waisted black pencil skirt with a white sleeveless crop top and shimmery peep toes.

It seems that Beckinsale has been schooling her cast mate Jessica Biel, who lost out to Beckinsale in the style stakes by opting for an awkward feathery white Giambattista Valli dress and neon coral heels. While Kate is actually the older of the two actresses by nearly a decade, she looked Biel’s junior with her fuss free hair, easy makeup and classic style. Take notes, Jessica you’re in the presence of a master!

The Twins in Trouble
Kate Beckinsale was "flattered" when her brea...
British beauty Kate Beckinsale gets ready to kick butt in remake of 'Total Recall'
She's one of Britain's most famous beauties, modeling a...