Gisele, Brady are Man and Wife 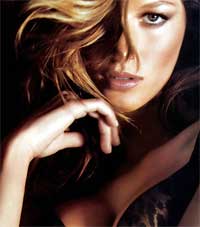 The Devil Wears Prada star Gisele Bundchen and American football star Tom Brady have tied the knot in an intimate California ceremony according to news reports. The , couple married on Thursday in a Catholic service in Santa Monica, with only close family and friends attending, according to the celebrity news site Usmagazine.com

The bride, 28, wore a strapless ivory lace gown by Dolce and Gabbana while her three dogs wore matching floral lace collars. There was no official confirmation of the wedding from the couple’s spokesmen. Bundchen, for long an on-off girlfriend of Hollywood star Leonardo DiCaprio, split from the Titanic actor in 2005. In late 2008, she and Brady bought an $11 million villa in Los Angeles’ upmarket Brentwood neighbourhood.

Gisele is the Top Grosser
Gisele Bundchen has topped a list of highest earn ing...
Leo's Got a New Girl
Leonardo DiCaprio, who was earlier romantically involve...