I Want a Man Just like Raj: Shamita Shetty 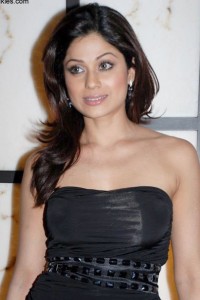 ‘Raj is just so absolutely wonderful. He is so calm, intelligent and good-looking. There could be no one better than him for Shilpa. He is just so perfect. I also want a man like him in my life,’ Shamita told IANS over phone from Mumbai.

The 29-year-old actress was until now a part of the third season of TV channel Colors’ reality show ‘Bigg Boss’ and came to know of Shilpa’s engagement only a week back. She has now taken a voluntary exit from the show to be able to be with her sister for her last few days at home. The episode will be aired Saturday.

Shamita said: ‘It feels fantastic to be out. I am just so excited about Shilpa’s wedding. Oh my god! She is getting married. I want to go home, cry, hug and chat with her. She has sent me a picture of her engagement ring on my Blackberry but it’s very hazy. So can’t wait to see that.

‘We tell each other everything, so I know how difficult it must have been for her to get engaged without me around. But since I got to know about her wedding date, I wanted to be with her no matter what. Family definitely comes first for me.’

Shamita was also worried about the clothes she would wear for the wedding functions, but to her surprise, her elder sister had already taken care of it all.

‘I was so worried about who will stitch my clothes within 10 days and how I will manage it all. But I just spoke to Shilpa and she said she has organised a few options for me. So I’m very happy that I don’t have to start planning from scratch,’ she said.

Shamita says her respect for Shilpa, who won ‘Celebrity Big Brother’, the international version of the show in 2007 after facing racist remarks, has risen by leaps and bounds after her stint in ‘Bigg Boss’.

‘I have begun to respect Shilpa so much more. I haven’t even faced 50 percent of what she must have faced. She was in a different country, with people from different cultures – it must have been hugely different. I can’t even imagine how she went through all that,’ she said.

As for her own stay in the ‘Bigg Boss’ house, Shamita said: ‘It feels great and fantastic that I wasn’t asked to leave. But I felt sad that I had to leave the house. My stay was pretty okay but I didn’t have an option. I had to leave for Shilpa’s wedding.’

Megan Turns on the Heat

Is Orlando Finally Engaged to Miranda?