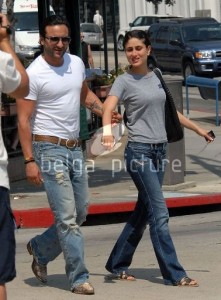 Bollywood’s most stylish and promising actress Kareena Kapoor will be next seen in two ambitious projects Kurbaan opposite beau Saif Ali Khan and 3 Idiots opposite good friend Aamir Khan.

Both the films and Kareena’s characters are creating a lot of buzz in the market. And now Kareena is confused about how she should manage the promotion of both these films.

Sometime back Katrina Kaif too faced a similar dilemma. She had to choose between either promoting Ajab Prem Ki Gazab Kahani or De Dana Dan. And it’s noteworthy that Kat chose Ranbir over Akshay.

Here Ritesh Deshmukh emerged as a winner, when he managed two of his films’ promotion perfectly. The actor was seen in the press conference of Do Not Disturb and the very next day he appeared for Aladin.

B-town babes should learn this balancing act from our Aladin!

Bollywood Celebs Raise Voice Against Child Trafficking
Amitabh Bachchan, Abhishek Bachchan, Preity Zinta, Shab...
Raj to ride on Chariot to Marry Shilpa Shetty
Instead of the traditional mare bringing the groom to S...
Aishwarya Bachchan Corporation Limited?
The Bachchan family is back in the spotlight as the Ami...