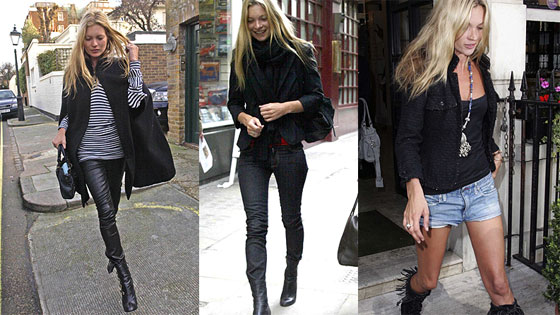 Kate Moss has allegedly cheated on Jamie Hince. The supermodel, who has been dating The Kills rocker for two years, reportedly slept with Eve Berlin of the American band Living Things after meeting the group in Germany last summer.

Berlin’s brother, the band’s singer, Lillian, revealed, “Walking in on my brother and Kate Moss with their clothes off, that was awkward. I don’t like to look at my brother naked.” According to Lillian, the encounter took place last June but when asked the status of Moss’ relationship with Hince at the time, he replied, “No comments. What he doesn’t know won’t hurt him.” Moss hit it off so well with the group that they were asked to appear with her in a photo shoot for Roberto Cavalli’s Just Cavalli fashion label. Lillian added to take40.com, “We thought, ‘Let’s take some money from these rich people and go buy some musical equipment. I’ll sit there next to Kate Moss holding a guitar and go collect $10,000 each’.”

Moss and Hince’s relationship was rumored to be in trouble last July over the strain of him being away for too long.

Looking ahead: what will Kate Moss wear to the Olympic Closing Ceremony?
It's finally here: Vogue's internationally famous Septe...
It Brits: the girls of autumn 2012 fashion campaigns
Plenty of our favorite celebrities are earning extra st...
It Brits cover the hottest October fashion magazines
Some of Britain’s hippest girls are once again covering...

Keira to be Cloned

Sienna to Be Turned Into a Doll