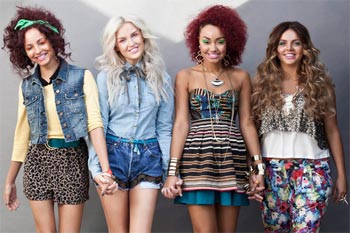 If you’ve been following British girl band Little Mix through their win on ‘The X Factor’, then you know that all four of the girls have a very unique fashion sense. Now, some of the girls have revealed their fashion inspirations and they aren’t who you might think!

Jade has been compared to Cheryl Cole and has said that both Cole and Beyonce Knowles are her idols. However, it appears that she prefers the opposite sex when it comes to fashion inspiration, stating that she looks to English rapper Labrinth as her fashion muse.

Meanwhile, Leigh-Ann says she loves American actor and rapper Will Smith’s style: “People call me the Fresh Princess of Bel Air,” she said, in reference to the TV show ‘The Fresh Prince of Bel Air’ that initially made a young Smith famous. She continued, “I’m obsessed with his style!”

In a second shot, the girls go for matching black style. Jade wears geek chic glasses, knees socks, and a short dress; Jesy sports a headband and mini shorts. Leigh-Ann is the girliest in a sheer skirt and printed top, while Leigh-Ann wears glittery leggings and a hooded jacket.

Little Mix has been heating up Britain since becoming the first group entry to win ‘The X Factor’ in the show’s eight-year history. Mentored by former N-Dubz member Tulisa Contostavlos while on ‘The X Factor’, the British band is set to release their first album later this year. Their first single, ‘Wings’, is set to debut this month.