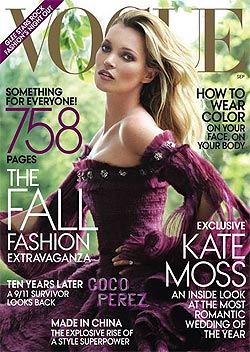 It’s finally here: Vogue’s internationally famous September issue, a veritable Bible of fashion, is finally on newsstands. And inside, we get a tantalizing look at some of the alleged stars of the upcoming Olympic Closing Ceremony in London, including British supermodel Kate Moss.

It might seem like looking ahead a bit too soon, but buzz is already building about the Vogue photo shoot, which features Moss posing in a gold encrusted bias-cut gown, specially created by Sarah Burton of Alexander McQueen to celebrate the London 2012 Games. And while Moss herself might not be a sportswoman, she certainly looks like she’s captured the gold medal in the photo shoot. Now the photo has everyone wondering: is it a sneak peek at what Moss might wear to the Olympic Closing Ceremony?

Now, rumors are swirling that these stylish supermodels may make up part of the Olympic Closing Ceremony, set for Sunday, August 12. We already know that Moss will be at the Ceremony, and with the tantalizing picture of that golden McQueen dress, everyone wants to know if it could be a hint of what she’ll wear for her appearance. We also know that Brazilian supermodel Alessandra Ambrosio will be on hand to accept the handover of the Games to Brazil, host of the 2016 Summer Olympics in Rio de Janeiro, Brazil; so whatever these lovely ladies wear, it ought to be one glamorous closing ceremony!

The Recipe Queen
After conquering the modelling world and storming the h...
Kate Cheated on Jamie
Kate Moss has allegedly cheated on Jamie Hince. The s...
It Brits: the girls of autumn 2012 fashion campaigns
Plenty of our favorite celebrities are earning extra st...

“I had no issues with Imran”- Genelia D’Souza

Interview with The Shopper from ShopandTrack.com

Seven things that shouldn’t be said via text message