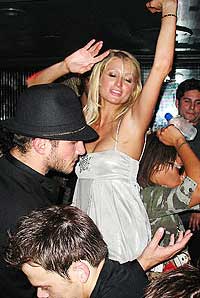 Paris Hilton had some unwelcome guests at her door early morning as cops had to pay her a visit after her neighbours complained of loud noise. The 28-year-old star reportedly annoyed locals because of her party at around 4 am, prompting neighbours to call in the police, reported TMZ.com.

But Hilton cut out the noise by the time officers from the Los Angeles Police Department arrived at her property at Hollywood Hills to investigate. It’s not the first time Hilton has irked her neighbours with her noisy antics. Earlier this year, cops were called to her home twice in the same week in May after similar complaints.

Paris however has taken to the micro blogging website “Twitter” to deny the incident. “Reading another stupid rumour on the net. The cops never came to my house and I never had a house party. Stupid lie,” wrote Hilton.

Paris Spends to Save World Economy
Paris Hilton has a plan to beat the recession... shop e...
Paris Shares Bed With Pig
Socialite heiress Paris Hilton says that she and her bo...

Gisele is the Top Grosser

Nicole’s Got Back Her Wings