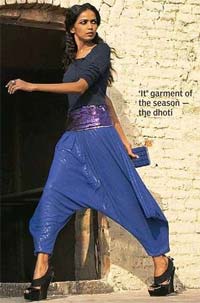 India is the flavour of the season. Whether it’s the Indian dhoti, sari, sherwani, maang tika or mehendi — international designers are showing grand affinity towards everything desi. After Jean Paul Gaultier’s and Armani’s dhoti pants, the silhouette is touted as the musthave of spring/summer 2009. Giorgio Armani and Ralph Lauren are the latest to join the dhoti bandwagon.

The nine-yard wonder has also had many global adaptations. While Hermes, Lanvin, Versace and Alberta Ferretti have showcased their interpretations of a sari, Hermes’s Jean Paul Gaultier describes reinterpreting the sari as “a pure pleasure”. Interestingly, Hermes’s spring/summer 2008 collection was called ‘Fantasies Indiennes’ and included some sari-styled cocktail dresses.

Popular American designer Oscar de la Renta confesses to have been “enormously influenced by the country’s colour and beauty.” It isn’t surprising then that most of the designer’s embroidery work is done in India and that two of his bags are called ‘Bombay’ and ‘Agra’.

Women Happy to Dress Skimpily for Promotion
A third of women are prepared to dress provocatively in...
Fashion Fit For The First Lady: Get Michelle Obama's Style For Less!
Incessantly compared to Jackie Onasis for her impeccibl...
A True Carrie Moment
Like every girl on the planet I love Carrie, the charac...