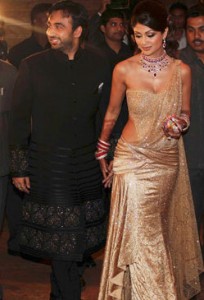 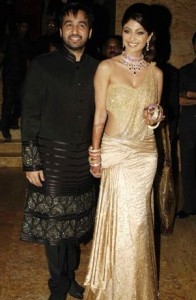 Shilpa Shetty Kundra’s grand wedding is now officially over. Now, the couple will head to Bahamas for their dream honeymoon. On Tuesday night, the Kundras hosted a lavish reception for 400 guests at Mumbai’s Grand Hyatt.

The couple left no stone unturned to make their reception a grand one.

While the wedding was conspicuous by its absence of star power, Tuesday’s party at Mumbai’s Grand Hyatt was something else.

The evening kicked off with arrival of the stars and the grand entry of the newly weds who were accompanied by family members.

Shilpa walked in hand-in-hand with Raj for her reception. She looked her best in a gold sari gown designed by Tarun Tahiliani. 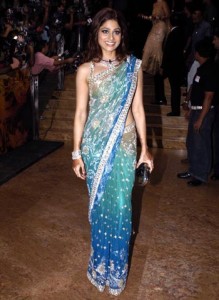 TT has designed all of Shilpa’s wedding outfits. The matching diamond and ruby jewelry flaunted by Shilpa has been designed by Anmol Jewelers. Raj looked dapper in a black sherwani.

In his new avatar as Shilpa’s husband, Raj appears to be at ease in front of the camera. Check out the couple as they pose for the media. Raj appears to match Shilpa’s grace. Media reports say the couple ensured the guests were well looked after.

The frenzy outside the hotel made it clear that this was going to be a star studded night.

Shilpa’s co-star in Dus and Phir Milenge Abhishek Bachchan couldn’t make it. But his gorgeous wife Aishwarya Rai and father Amitabh more than made up for his absence.

It seems the Bachchans and the Kundras are going to be neighbours as Shilpa and Raj are moving to Juhu, a suburban area in Mumbai where Amitabh Bachchan’s famous building Jalsa is located. 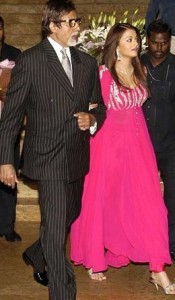 Shilpa’s very first co-star in Baazigar Shah Rukh Khan also made it to the party with his wife Gauri. The two didn’t stay long though.

Kangana Ranaut looked very pretty in a pink sari. Both Kangana and Shilpa have worked in Life In A Metro.

Rekha and Jaya Pradha looked like twins in similar gold saris. Jaya who is Shilpa’s friend and co-star in their Indo-Chinese venture The Desire, gave her blessings to the happy couple. 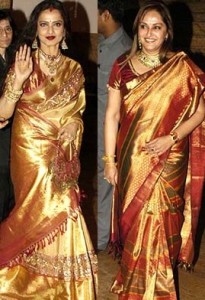 Filmmakers Farah Khan and Nagesh Kukunoor also made an appearance.

R Madhavan, whose 3 Idiots is due for release this December was spotted with his wife Sarita Birje at the party.

This season’s Bigg Boss evictee Tanaaz Irani came with her daughter Ziah. Another former Bigg Boss housemate, Monica Bedi also made it to the party.

Shilpa’s close friend Suniel Shetty conveyed his best wishes to the couple as did Govinda who came with wife Sunita and daughter Narmada.

Unlike the other guests who were dressed up to the nines, Jackie Shroff went the extreme opposite in faded jeans, white-shirt, black jacket, a green scarf and brown shoes.

Filmmaker Karan Johar and designer Manish Malhotra, both in black made a dashing entry together.

We spotted Rani Mukerji looking quite fetching in a pink and gold sari.

Looks that Could Kill

Penelope Cruz ‘passed out’ at Oscars…