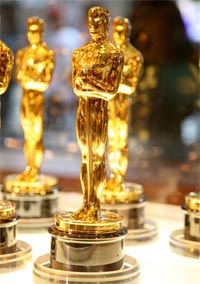 Rags-to-riches romance Slumdog Millionaire scooped up eight Oscars on Sunday, the most of any movie this year, including best motion picture.

Among the Slumdog honours, Briton Danny Boyle was named best director for the often dark but ultimately hopeful tale about a poor Indian boy who competes for love and money on a TV game show, and writer Simon Beaufoy won adapted screenplay.

“You’ve been been so generous to us this evening, and I want to thank you for that,” Boyle said to the Academy Award audience when accepting his Academy Award.

Boyle also thanked his family, the film’s makers, and the entire city of Mumbai, where Slumdog was shot.

Kate Winslet was named best actress for her dramatic turn as a former Nazi prison guard who involves herself in a love affair with a teenage boy in The Reader. She fought back tears when accepting her trophy and remembered a time as an 8-year-old when she dreamed of winning one of the world’s top film award.

Early honors went to Penelope Cruz who became the first Spanish actress to win an Academy Award for her supporting role in Vicky Cristina Barcelona. Heath Ledger was posthumously named best supporting actor for his villainous role as The Joker in Batman movie The Dark Knight.

Suprises at the Oscars
This month’s Academy Awards will have lots of new thing...
Young Hotties to Host the Oscars
The Oscar bosses are roping in young Hollywood heartth...
Best dressed women at the Oscars
As the awards season wrapped up last night with the Osc...