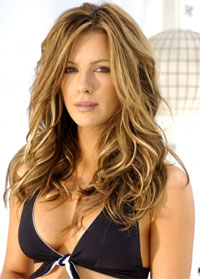 Kate Beckinsale was “flattered” when her breasts became a talking point in the press ing point in the press until she realised critics were judging her assets. The actress admits she was pleased with tabloid reports which suggested she had undergone a breast enhancement operation after she put on weight for her role in 2004’s The Aviator. But she was hurt after learning her chest was being ridiculed by the media.

She says, “At one point I felt as though everyone was out to get me. We were suddenly talking about breasts not brains. I was having everything examined from my cellulite to my choice of films. I had allowed myself to be flattered when all this talk of breasts started because I assumed it meant I looked good. But when I found out it meant I had horrible boobs I was taken aback. I began to wonder why I cared about things which, essentially, don’t matter at all.”

And despite being named Esquire magazine’s Sexiest Woman Alive, Beckinsale insists she still worries about her image: “I’ve always had doubts about my looks. Most women have body issues and I’m no different.”

Suprises at the Oscars

Emma Watson speaks out on fashion and body envy