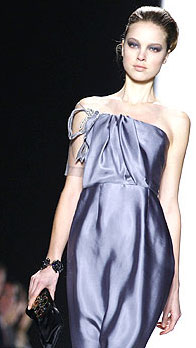 Narciso Rodriguez was among the designers who prepared for battle at New York Fashion Week on Tuesday with an urban warrior theme that featured exposed zipper details, “camouflage lace” and heavily hardwared belts that looked like they were holding bullets. Even elegant Badgley Mischka was more somber than red-carpet ready, opening with an aggressive daytime look and a series of black pieces with a taffeta-wool checkerboard weave.

Tough-as-nails dresses heavy on black and metallics were on the runways of Herve Leger and Nicole Miller, with other designers relying on aggressive hardware or patent-leather trims. The usually girlish Cynthia Rowley presented an almost all-black collection. It’s a trend that fits with the strong shoulder (and shoulder pads) that have also been prominent on the runways. Mercedes-Benz Fashion Week runs through Friday.

Even in these tough times, you can’t keep a good gown down. Badgley Mischka made the crowd wait until the last look for the glitz and glamour the label is known for, but it was there, in all its glory.

The overall tone of the fall collection was more somber than Mark Badgley and James Mischka usually embrace: There was a lot of black and little beading. The finale dress, though, with all-over copper beading delicately covered by black tulle, fused seamlessly subtlety and shine.

The daytime dress that opened the show was barely identifiable as a Badgley Mischka. Still, the brand’s socialite fans had some options: A heavily embellished gown might seem inappropriate now, so they designers stuck mostly with satin, draped this way or that to create a little newness.

Narciso Rodriguez’s urban warrior theme carried through every look, and he offered his take on the camouflage print, which was black and white, like almost everything else on the runway. There were flashes of highlighter yellow and pink, but even they were almost always paired with black. He did soften a few pieces, however, by adding an overlay of “camouflage lace.” Instead of showing a lot of skin, Rodriguez ramped up the sex appeal with strategically placed cutouts like his alternative to the turtleneck, a style he called the “X-neck.” It was a high crisscross neckline with just a small triangle of skin showing just above the breastbone.

If Mad Max went to outer space, he might wear Rodarte. For their fall collection, Kate and Laura Mulleavy, the sister duo behind the label, embraced the tough vibe that has spread throughout New York Fashion Week, showing plenty of leather and silver mini-dresses with a tattered, haphazard vibe. Sleek dresses, most in silver with a few hints of color, were made from layered patchworks of leather, tulle, lace, lame, chiffon and even crystals. The designers fell in love with marbled leather, using it for more than half their looks. Their best were strappy, buckled-leather jackets that went with tough, thigh-high boots.

A disco-ball dress for Michelle Obama? Probably not. But before Thakoon Panichgul famously dressed the now-first lady, cool model types wore the designer’s clothes. That’s who he seemed to have in mind for his new fall collection, never mind that White House social secretary Desiree Rogers was in the front row next to Vogue editor in chief Anna Wintour.

The Thakoon runway was filled with graffiti-paint fur – a “so-what?” statement to the down economy, perhaps, narrow sheaths and cool coats. The finale look, a sequined one-shoulder dress with a dramatic bow to top it off was a fine piece of handiwork with the beads appearing to float between layers of tulle.

Add scrunchy socks and high-top sneakers to the list of ’80s styles making a comeback.

Marc Jacobs gave his punk princess something to wear during the day at his Marc by Marc Jacobs show on Tuesday: cozy jumpsuits, colorful stripes and schoolgirl plaids.

Many designers have taken a more somber tone. Not Jacobs, who presented an explosion of mustard, red, purple and green, sometimes all in one outfit.

Pants with a loose fit, many with zippers down the side revealing inset patterns, were tucked inside socks for a more wearable harem pant silhouette. Footwear included high tops for men and women, along with fur-covered boots.

The new British invasion came with an explosion of color on the catwalk of designer Matthew Williamson.

And it wasn’t just one or two wild brights in a sea of black, as other designers have done. Williamson instead created a kaleidoscope of crimson, coral, mint green and turquoise _ and then shook it up. He had success with metallic jacquards, both a sunset-colored sunburst that brightened up a minindress and a mint green-and-silver, skinny-leg pantsuit, and a slinky Spirograph-print column dress with a high neck and beaded sleeves was fresh and modern even if it was something the coolest housewife on the block would have worn in the 1970s.

For the tough chick who might occasionally crave a ruffle, or a delicate wisp of a woman who lusts after a little leather, there’s Cynthia Steffe.

The brand, now designed by Shaun Kearny, debuted its fall styles with pieces that fit the overall tough tone the industry has adopted for next season, yet were carried out more subtly. Kearny dubbed the collection, “Tough and Sweet. Rock ‘n’ roll chic.” The show opened with dresses that walked that fine line, including a buttery black leather dress with a ruffle running vertically down one side and a hunter-green hammered charmeuse dress with a leather yoke and exposed back zipper.

Other trends Kearny hit were peplums, fabric that juts out at the hips, which balance out the strong shoulders. There also was a metallic cocktail dress, another must-do for designers this season, and there was the space-age silhouette, too, his version a stiff gold boucle coat.

The most outstanding pieces from the new fall Tahari fashion collection are those inspired by the Japanese cherry blossoms, which just happen to be a symbol of good fortune and love. Consider those designer Elie Tahari’s good-luck charms for the industry with the black cloud of the economy hanging over the heads of retailers, editors and stylists getting their first glimpse of what clothes will look like next season.

That Japanese motif was used for a printed sequin skirt worn with a short-sleeve, cranberry-color cashmere sweater as well as a long printed dress that loosely resembled a kimono. Another black mesh blouse with puffy Victorian sleeves had a delicate Asian floral applique that paired nicely with a narrow pencil skirt.

Christian Dior Fashion Show in Paris
The Dior spring/summer 2009 collection strode down a Pa...
Runway Bloopers
There are a lot of elements which makes a catwalk hazar...
NY Fashion Week Spring 2009
Live from the tents, ELLE editors take you into New Yor...