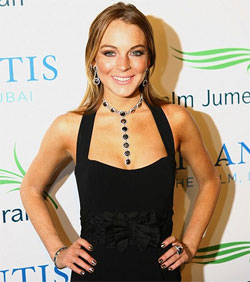 Lindsay Lohan will be questioned by British cops over a theft of jewellery worth £250,000 that she modelled in a fashion shoot. A diamond necklace and earrings worn by the Mean Girls star went missing after the photo shoot for Elle magazine at London’s Big Sky Studios.

The staff came to know about the missing Dior jewellery two days later. Dior bosses, who made the jewellery especially for Lohan’s article and loaned it for the shoot, are said to be livid.

“There have been no arrests at this stage. We will speak to a number of people in connection with the inquiry,” the Sun quoted a Met Police spokeswoman as saying.

A source added: “Jewellery is often loaned out for big celebrities to wear on fashion shoots”. Police are working out who had them when they went missing.

“People at Dior are very upset. It’s an embarrassment to the mag.”

Lindsay Goes Dating Again
Lindsay Lohan seems to have turned a new leaf after t...
Lilo Dating Gerard?
Lindsay Lohan has laughed off reports that she is rom...

Getting Better with Each Shot